A collection of informative resources for Filipinos and non-Filipinos alike. 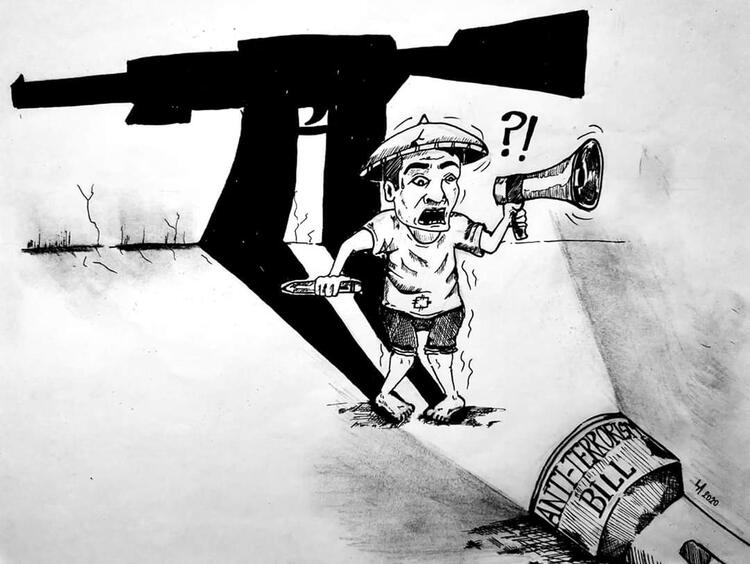 JUNE 30, 2020
05:55PM PRIDE20 is released after 4-day detention.
07:10PM 6 Students of #Iligan16 were "visited" by non-uniformed AFP and PNP maliciously "questioning" them about the June 12 protest. One of the 6 was shown a record that she and other students are already being red-tagged by the AFP.

JUNE 7, 2020
[source needed] Some CEBU7 members are released from detention.

JUNE 5, 2020
10:42AM Police team arrives in riot gear to forcefully disperse a peaceful protest against Anti-Terrorism Bill on UP Cebu, arresting seven individuals.

This is a list of contacts to free public legal services provided by several local organizations. Contact them via the mobile numbers or message them on social media through the links posted. Click here to read your rights.

Volunteers & Lawyers Organized for the Rule of Law
Facebook: VALOR 19

The Republic Act No. 11479, violates the following sections of Article III: Bill of Rights as stated in the 1987 Constitution of the Republic of the Philippines.

Section 1. No person shall be deprived of life, liberty, or property without due process of law, nor shall any person be denied the equal protection of the laws.


Section 4. No law shall be passed abridging the freedom of speech, of expression, or of the press, or the right of the people peaceably to assemble and petition the government for redress of grievances.

Section 14. (1) No person shall be held to answer for a criminal offense without due process of law.

Section 18. (1) No person shall be detained solely by reason of his political beliefs and aspirations.

Please also take the time to read this thread that skims over what has been happening in the Philippines for the past year.

is enacted by the government to "prevent and stop" terrorist attacks in the country by directly targeting individuals who are profiled to be most likely to join terrorist groups or perform terrorist acts. ^will render the state and its forces to be in complete power of defining what constitutes an act of terrorism or conspiracy thereof, who are to be considered terrorists or conspirators thereof, and what to do with these individuals.assumes that any suspicions raised by state institutions such as PNP and AFP are enough basis for who is considered a terrorist and/or a conspirator thereof.allows police, law enforcement, and military personnel duly authorized by the Anti-Terrorism Council (ATC) to carry out warrantless arrests without incurring liability under Article 125 of the Revised Penal Code.dictates the allowable period of detention to be extended to 14 working days, and extendible by 10 more days. ^renders suspects illegible for any reparations in damages per day for wrongful detention (they removed these penalties, and the grievance committee to investigate complaints against security personnel) ^
(the above is based on a transcription of an infographic made by @NUSPhilippines)

WHO IS CONSIDERED A TERRORIST OR CONSPIRATOR?
According to the Senate Bill 1083, you can be considered a TERRORIST if you:
cause damage or attempt to cause damage to government properties/facilitiesassault or attempt to assaultbuy/carry a knife or anything that can be used to killmeet up with your friend/s (possibly secretly plotting an attack with them)donate to or aid relief drives that aren't government/state-recognized.participate in a rally or any movement that may cause a "serious risk to public safety"posting, writing, sharing and/or retweeting posts related to "terrorist activities"
(the above is a transcription based on an infographic circulating on Twitter.)

CASES OF ABUSE USING THE HUMAN SECURITY ACT ^
Aeta peasant Edgar Candule was arrested by the PNP, warrantless, on March 21, 2008 in Botolan, Zambales. He was charged with terrorism under Section 3 of the Human Security Act based on allegations of possession of a firearm and subversive documents, describing him to be “engaged in sowing and creating a contention of widespread fear and peace among the populace.” The charges were dismissed two years later.Lumad leader Jomorito Goaynon and peasant organizer Ireneo Udarbe were arrested on January 28, 2019 in Talakag, Bukidnon. They were charged with illegal possession of firearms and explosives, violation of the election gun ban, rebellion, and violations of the HSA. The charges were dismissed in the same year. Goaynon, however, remained in detention for fabricated charges of kidnapping, robbery and arson.More on Lumad killings
WITH THIS BILL, THE GOVERNMENT IS IN FULL POSITION TO KILL DISSENT AND OPPOSITION. ^

WHAT ARE THE IMPLICATIONS
OF THE ANTI-TERROR BILL?

1. GOVERNMENT TAGGING OF OPPOSITION/DISSENTERS AS ORGANIZATIONS AFFILIATED WITH TERRORIST GROUPS
Any member of tagged organizations can be detained or jailed without the chance to appeal.Additionally, anyone suspected to be a terrorist can be imprisoned with unbailable life sentence.
2. ABSOLUTE POWER FOR STATE INSTITUTIONS LIKE AFP - PNP, PERMITTING VIOLATION OF THE CONSTITUTION AND HUMAN RIGHTS
Despite the tainted reputation of AFP-PNP in terms of factuality, intuition, and intention due to past cases of abuse in reprimanding alleged violations of HSA, the Bill still assumes that they are the most rational and reliable institution to handle the task of identifying terrorism, terrorist acts, etc.No check and balance for AFP-PNP. There is an absolute monopoly of power.Surveillance of suspects, and interception and recording of communications, will be allowed for 60 days, even on the bases of mere suspicion. The person being surveilled or wiretapped need not be informed.Proscription of any individual organization, association, or group of people shall proceed ex parte, meaning the person/group involved need not be informed that a petition to proscribe them has been filed.
back to top.


3. PARALYSIS OF CRITICAL AND PROGRESSIVE ACTIVITIES
Organizers and participants of events or activities that may fall unto the shallow and broad definition of terrorism by the government can be sanctioned.
4. NO ONE IS SAFE
As AFP-PNP takes control of power and tyranny sits over the Malacanang Palace, they can label anyone as terrorists by virtue of order, and in a smooth, legal manner.Note that eventualities should the Bill be enacted listed prior are parallel to that of what occurred during the period of Martial Law under Marcos' dictatorship in the 70s.
(the above is based on a transcription of the infographic made by @NUSPhilippines) 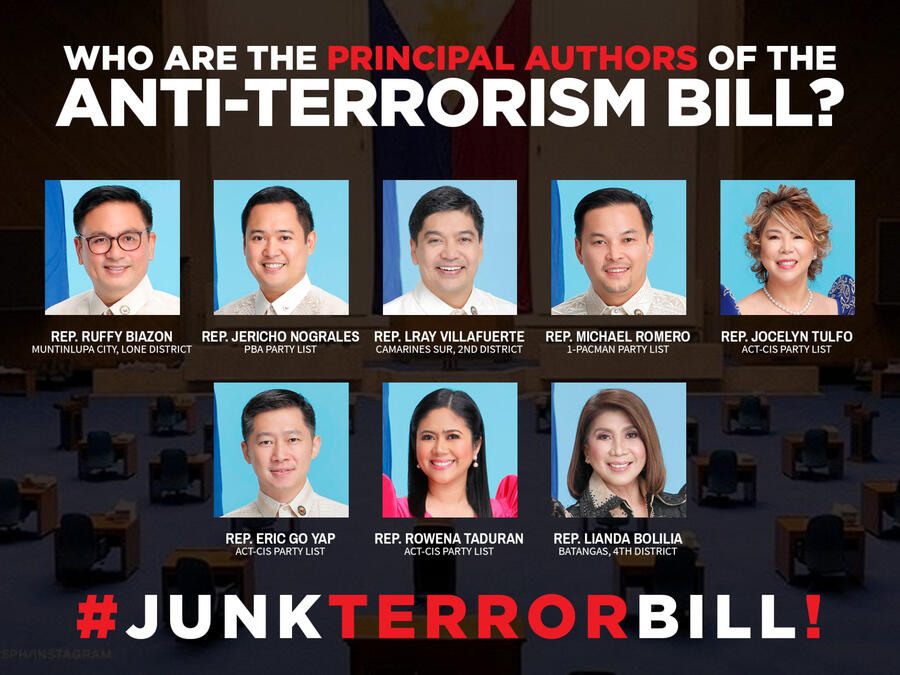 PRINCIPAL AUTHORS OF THE
ANTI-TERRORISM BILL:

Join the Telegram channel for every day updates.Join mass organizations protesting the Terror Law. There are plenty with open applications on Twitter. Be engaged.Block any friends who have expressed pro-government sentiments. They will rat you out.Check your anti-admin Facebook groups as some of them are used to redtag protesters, activists, etc.Check for any imposter accounts on Facebook, and report them.Increase your e-mail security, sign up for encrypted e-mails.Stop signing unofficial petitions as they gather your data.Send e-mails to representatives using a VPN and a burner e-mail.Have your lawyer's number on standby, and if you don't have a lawyer, here is a list of free/affordable legal services.Share or donate to the donation drive.

Express your opposition to the terror law on social media with the use of #JunkTerrorLawNow. Tag celebrities and even our local celebrities to be vocal about the Terror Law.Send emails to our representatives.Share or donate to our donation drive. Share it again.Offer support to your Filipino mutuals and keep spreading information.Archive online information that may be deleted for censorship purposes.Let other filipinos know not to sign unofficial petitions as they gather your data.

This space is for any ongoing bail funds. Click the above for the donation drive.

HOW TO BE SAFE IN PROTESTING ONLINE:

Especially if you are underaged, it is heavily advised to remain as anonymous as possible when contacting these institutions and people in positions of power. DO NOT use your personal emails, numbers, and even information. Use a fake name if you must.

During these times, it's best that we secure ourselves from sites that track our IP addresses. Get a VPN. Some are free. VPNs with subscription fees are ultimately more secure.


FOR SENDING ANONYMOUS EMAILS:
guerillamail.com
tempmail.ninja
trash-mail.com
MORE BURNER EMAIL SITES.
Typically you just enter the details. You may have to make up the email yourself, but make sure it isn't revealing. Click send or send mail found at the either the bottom or the top of the fields.

Proceeding to the actual details of the protest.

The above links contain details as to whom to send the e-mails to and what to say.

WE CAN'T RELY ON PETITIONS.

AS OF JULY 4, 2020, DO NOT SIGN PETITIONS ON CHANGE.ORG. THEY ARE USING THE PETITION SITES TO GATHER NAMES AND INFORMATION FOR REDTAGGING PROTESTERS. THERE WAS AN INFLUX OF FAKE ACCOUNTS ON FACEBOOK BEARING THE NAMES OF THESE INDIVIDUALS.

The government is not legally obligated to acknowledge an unofficial online petition (like that of change.org). Simply signing the petition will not sway much into our favor, they will just ignore it.

If you want petitions to be effective, demand for an official petition site to be built in the e-mail protest linked below.

HOW ELSE CAN I HELP?
Donate. Join the e-mail protest. Spread the word on Twitter and any other social media. Keep #JunkTerrorBillNow, #MassTestingNowPH, and #OustDuterteNow trending.
If you are not from the Philippines, show Filipinos your solidarity by listening to them and boosting their tweets. Let the Philippine administration know that even internationally, the Anti-Terror Bill is believed to be a dumpster fire of an idea.